As the cooler air of autumn brings relief from the South’s summer heat, the appearance of oversize bags of candy heaped onto store shelves announces the approach of many a child’s favorite fall day: Halloween. It means youngsters get to play dress up and get free candy simply by knocking on doors and yelling, “Trick or treat!”

For mothers, it means buying that candy. Lots of it. On Halloween night, the large neighborhood where we raised our family literally teemed with trick-or-treaters scurrying from one house to the next. I had to be ready.

I usually bought at least two giant bags of inexpensive assorted candy, plus I often snatched up a bag or two of bubble gum to add to the mix. And always, in spite of my best intentions not to do so, I purchased two or three—okay, four—bags of snack-size chocolate candy bars. My favorite. I snacked on them in the tidbits of time between children coming to the door.

As dusk descended, it was the youngest trick-or-treaters who first appeared on our doorstep, cutie-pies costumed as fairies, princesses, ballerinas, pirates, or perhaps superheroes. “Say ‘trick or treat,’” their smiling parents encouraged them. And once candy was dropped into the little ones’ pumpkin-shaped pails, Mommy or Daddy would prompt, “Say ‘thank you.’”

As the evening progressed, so did the age of the children, some in store-bought costumes, others in creative homemade attire. I especially remember the girl who wore a ladylike blue dress, a white-haired wig, and a double strand of large pearls around her neck. When she snapped opened the purse on her arm for me to deposit candy, I asked, “Now who are you?”

“Barbara Bush,” she answered. Of course, she was!

By the time true darkness set in, I could count on one last batch of trick-or-treaters appearing before I turned off our lights: boys on the edge of being too old to trick-or-treat. Wearing camo clothing, they carried pillowcases for their loot. These were the recipients of the remainder of my candy. Giving it all away kept me from eating anymore.

Unfortunately, no trick-or-treaters come to where we now live. Thus, I relish the recent story about the time my daughter-in-law, Tish, joined my daughter, Kate, to pass out candy in her neighborhood while their husbands took the children trick-or-treating. When a rosy-cheeked toddler with eyes shining under her riot of curly hair came to the door dressed as a ladybug, my daughter-in-law’s heart melted. “Oh, you can have all my candy!” Tish told her.

Indeed, candy is sweet. But getting to see precious children having so much old-fashioned fun on Halloween is even sweeter. 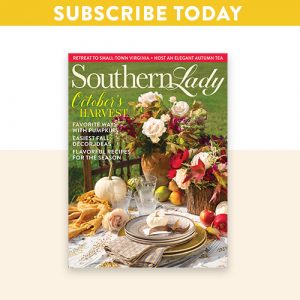