THE AUTHOR: CHARIOT ON THE MOUNTAIN

Jack Ford is an Emmy and Peabody Award-winning journalist, author, college professor, award-winning documentary film producer, and former trial attorney. An original anchor at the launch of Court TV, he was the co-anchor of the Weekend Today show, a substitute anchor for Nightly News and Meet the Press, and has worked as a correspondent for Good Morning America and ESPN. Currently he is a CBS news correspondent for 60 Minutes Sports and the co-host of MetroFocus on PBS. He has received two Emmy Awards, a Peabody Award, a National Headliner Award, and the March of Dimes FDR Award. A graduate of Yale University and the Fordham University School of Law, he is a visiting lecturer at Yale, NYU, and the University of Virginia, where he teaches a seminar on famous trials.

Below, Jack Ford shares a behind-the-scenes look into Chariot on the Mountain exclusively with Southern Lady Book Club readers. Enjoy!

I first discovered Kitty and her story on a blustery winter afternoon outside of an old courthouse in Virginia. In February of 2014, my wife and I were staying at the Inn at Little Washington located in the town often referred to as “the first Washington,” a village not much larger today than in 1749 when it was first surveyed by a young George Washington. Since I have spent so much of my professional life inside of courtrooms—first as a prosecutor and trial lawyer, and later as a legal journalist—I often seek out interesting courthouses on my travels. And the Town of Washington had just such a destination. I visited the 1830s-era courthouse in the center of town, an elegant red-brick, white-columned structure which still functions as the county court for Rappahannock County, and wandered through the building, spending most of my time in the small courtroom on the second floor. 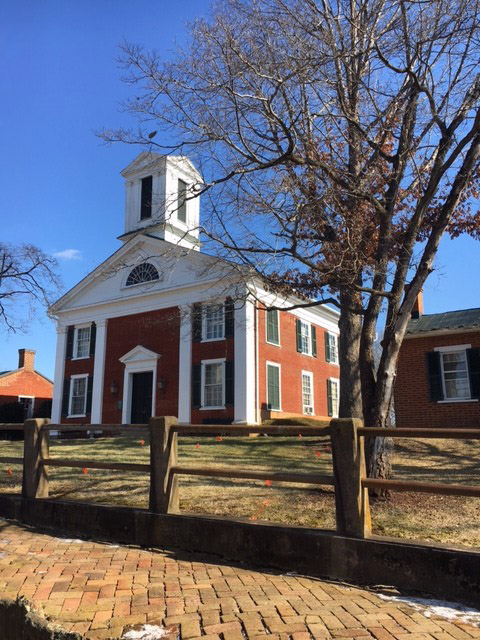 Leaving the courthouse, I was strolling around the grounds when I encountered a plaque in front of the building. The caption on the plaque read:  KITTY PAYNE***FREEDOM LOST AND REGAINED. Curious, I read the text which described the scant contours of Kitty’s story, including: the fact that she was born into slavery in 1816; that her biological father was her master; that her mistress had decided to free her following the master’s death; that, upon her emancipation, she and her children had traveled with their mistress to Pennsylvania; that she had been kidnapped by the master’s nephew, who claimed ownership of Kitty and her children, and forcibly returned to Virginia; and that “after complex court proceedings, she regained her freedom” in this courthouse. 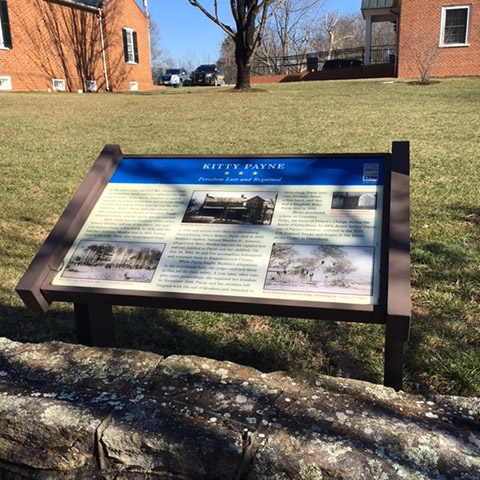 I was both puzzled and intrigued by the story. Puzzled because as a student of our justice system and a visiting professor at Yale, New York University, and the University of Virginia, where I have taught a seminar about famous trials, I had never heard of Kitty’s case. And intrigued because the idea that a slave in the antebellum South of 1846—slaves were deemed to be property and, as such, generally had no legal rights–had won her freedom in a Virginia courtroom seemed not only highly improbable, but nearly impossible.

This was the beginning of my quest to discover more about Kitty and her unlikely journey to freedom. The Rappahannock County Clerk’s Office, to my surprise and delight, provided me with access to the actual handwritten court records of the 1846 trial, including the witness list, the jury’s deliberation notes, and the judge’s final decision. From there, I was directed to the Rappahannock Historical Society where I was able to review an array of local newspaper articles and general information concerning the trial and the participants. Eventually, thanks to a suggestion from the Rappahannock Historical Society staff, I made my way to the Chester County Historical Society (PA) where I discovered a virtual treasure trove of research material. A Pennsylvania historian, Albert Cook Myers, had devoted nearly a decade in the 1940s to researching Kitty’s story, apparently with the intent of eventually writing a book. Although the book was never written, the boxes of material he had gathered—including letters and personal recollections from the descendants of Kitty and other significant players in the saga, contemporary newspaper accounts, and court documents—had been donated to the Society upon his death and provided extraordinary detail and depth for the story.

Yet, for all the biographical and chronological information I was able to gather, the answers to certain compelling and fundamental questions remained elusive. Why would Kitty’s mistress choose to free her? What was their relationship? What dangers did they encounter on their Underground Railroad flight to the perceived safety of the North? Why would the mistress continue to fight for Kitty’s freedom following the kidnapping, placing her own social standing in deeper jeopardy? How did the mistress enlist the aid of the richest woman in the county, a slave-owning symbol of traditional Southern society, in their battle? Why would an established, pillar-of-the-community lawyer agree to represent a slave in her unprecedented legal challenge? And, most important, just who was this extraordinary woman named Kitty—a slave who had the courage to challenge the laws and traditions, both written and unwritten, of the time?

It became a storyteller’s challenge. “Here are the essential facts; now tell us how and why this happened.” In order to accomplish this and to stitch the elements of the story together, it became necessary to imagine the characters’ motivations and their conversations. But as I began to write the story, I found that they were not the thoughts and words of complete strangers. As with many relationships, at some point after immersing myself in the details of their lives, as scarce as they were, I came to feel I somehow knew these characters. That I could sense what they might have been thinking and hear the words they may have spoken. At least, I hoped I did.

Although the resulting story is a work of fiction, the majority of the foundational facts are true. With just a few exceptions, all the characters described here actually existed, and their backgrounds, relationships, and roles in Kitty’s narrative are generally accurate. Despite the fact there is no record of the precise words spoken at Kitty’s trial, the portrayal of the proceedings reflects the available court records and the manner in which a trial at that time would have occurred. And, although the judge’s actual decision was cloaked in arcane elements of Virginia law of that era, the essence of the startling ruling depicted in the story is accurate and, at times, utilizes the judge’s authentic language.

Following her surprising courtroom triumph, this novel ends with Kitty’s departure from Virginia and her return journey to the hope of a new and better life of freedom in Pennsylvania. But that was not, of course, the end of Kitty’s actual story. Sadly, the life she found upon her return to Pennsylvania was not the kinder, gentler, and longer life she sought and so richly deserved. After traveling by foot for nearly six months, aided once again by Quaker families along the Underground Railroad, she and her three children settled near Gettysburg, Pennsylvania. Kitty became a domestic worker, living in various homes with her youngest child, Arthur. Eliza Jane and Mary, despite being not yet ten years old, were sent to live and work in neighboring homes.

In 1847, Kitty—who had begun using the name Catharine—married a free black widower named Abraham Brian, who had four children from his previous marriage, and moved into his home in Gettysburg. According to the recollections offered by her descendants, it was not a happy union. Brian apparently did not welcome Kitty’s children into his home so they were forced to remain apart from their mother, working and residing with local families.

On August 12, 1850, (there is some question as to the precise date) just four years after the courageous struggle that resulted in her emancipation, Kitty passed away. She had lived 38 difficult years on this earth, 34 of them as a slave—and 4 years as a free woman.

Of Kitty’s six children, four survived into adulthood. Eliza Jane worked and lived in Gettysburg for a number of years before moving to the Midwest. She survived the Battle of Gettysburg while hiding from the Confederate soldiers—who were known to kidnap free blacks and send them back into slavery—in the home of her employer. Mary became a Quaker, married an African-American man who had also escaped from slavery along the Underground Railroad, and eventually relocated to the Midwest as well. Arthur enlisted in the 27th U.S. Colored Troops during the Civil War and fought at the Battle of the Crater, part of the siege of Petersburg in Virginia in 1864. Little is known about the rest of Arthur’s life, including where and when he died. Frances was raised by her father, Abraham Brian, on his farm in Gettysburg. The Brian family fled from their farm during the Battle of Gettysburg, also fearful of being captured and sent back into slavery by the Confederate troops. The farmhouse was severely damaged during the fighting but was not destroyed and remains today as part of the Gettysburg National Military Park. Frances married a former slave who had escaped from the Confederate army during the battle, and they also ultimately settled in the Midwest.

Kitty is buried next to her husband in a small plot located in the Gettysburg National Cemetery. Her final resting place is marked by a simple, weathered granite headstone, which reads:

It is an unremarkable epitaph for a woman who lived a remarkable life.