Diane C. McPhail is an artist, writer, and minister. A graduate of Ole Miss, Duke Writers, University of Iowa Distance Education, and the Yale Writers’ Conference, she is a member of North Carolina Writers’ Network and the Historical Novel Society. The Abolitionist’s Daughter is McPhail’s major debut novel. She lives in Highlands, North Carolina, with her husband and dog.

A Note to Readers from Diane C. McPhail, author of The Abolitionist’s Daughter

My mother died when I was only nine weeks old. It was an era when people refrained from talking about sad or troublesome things in general, so no one ever spoke about my mother as I was growing up. Consequently I knew only that she had been a teacher and had loved to draw and sew. Beyond that, she was just a forever smiling face in a photo.

Well into my adulthood, I developed an intense need to know who my mother had been. 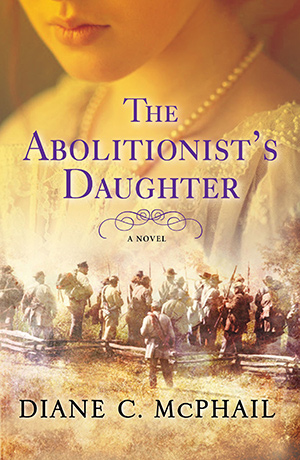 Those closest to her—my grandparents and most of her siblings—were all gone, but my uncle Ralph still lived in the old family farmhouse in Mississippi. He welcomed me with stories and albums of old photos, describing how his little sisters would set up house under the shrubbery while he came riding his tricycle to deliver the mail. As I was basking in these stories, I turned a page in an album to find a yellowed newspaper account of the Greensboro “feud.” I grew up hearing mentions about this legendary feud, which had resulted in a single incident of extreme violence.

“Ralph,” I said, “this story has always haunted me. I don’t understand the motivations that lead to this, and I can’t imagine how these women who survived managed to go on with life.” By then I was a therapist and deeply involved in understanding trauma.

My uncle looked at me quietly for a moment and said, “Diane, don’t you know who that young woman was? The one who had to bury all of the men in her family?” I shook my head, waiting. “That was our grandmother,” he said, “mine and your mother’s.”

I was stunned. Here was a secret I hadn’t anticipated, hadn’t known existed.

I began to write stories, or scenes, trying to work out the psychological complexities of my forbears. Of course, without their own words, that was impossible. Drawing from my own therapeutic experience, my conjectures began to link and weave together. I realized I was writing a work of fiction, fact-based historical fiction with themes and truths far greater than my own family.

Historical novels take intricate research. I discovered a family historian. I found a trove of my great-great-grandfather’s papers in the archives of Mississippi State University Library. I discovered more secrets no one talked about, including one of huge import. As an appointed judge in a time after manumission had been made illegal, my great-great-grandfather defied the law by attempting to free his slaves. He also conspired with his own children’s tutor to illegally educate them. Because he was a judge, he was able to secretly defy the law by marrying them. In short, he was a slave-owning Southern abolitionist. And my mother’s grandmother was The Abolitionist’s Daughter.

As you now know, this novel is based on history. My fictional account explores complex relationships between men and women of different classes, races, hopes, and history. But it began with my desire to learn more about my heritage and then to explore how the will to survive trauma drove so many women whose families were devastated by acts of violence the Civil War.

It is an examination of a little-known aspect of the struggle against slavery. Much has been written on Northern abolitionism and Southern anti-slavery via the Underground Railroad, but there remains little familiarity with those who rescued slaves from horrible conditions by buying them, illegally educating them for the freedom that must ultimately come, and legally marrying them when it was illegal to do so—all at their own peril.

Thank you so much for reading,