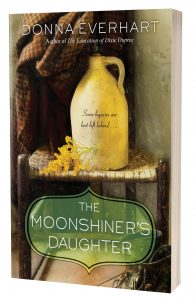 About The Moonshiner’s Daughter:

Set in North Carolina in 1960 and brimming with authenticity and grit, The Moonshiner’s Daughter evokes the singular life of 16-year-old Jessie Sasser, a young woman determined to escape her family’s past.

Generations of Sassers have made moonshine in the Brushy Mountains of Wilkes County, North Carolina. Their history is recorded in a leather-bound journal that belongs to Jessie Sasser’s daddy, but Jessie wants no part of it. As far as she’s concerned, moonshine caused her mother’s death a dozen years ago.

Her father refuses to speak about her mama or about the day she died. But Jessie has a gnawing hunger for the truth—one that compels her to seek comfort in food. Yet all her self-destructive behavior seems to do is feed what her school’s gruff but compassionate nurse describes as the “monster” inside Jessie.

Resenting her father’s insistence that moonshining runs in her veins, Jessie makes a plan to destroy the stills, using their neighbors as scapegoats. Instead, her scheme escalates an old rivalry and reveals long-held grudges. As she endeavors to right wrongs old and new, Jessie’s loyalties will bring her to unexpected revelations about her family, her strengths, and a legacy that may provide the answers she has been longing for.

To watch a short video about The Moonshiner’s Daughter, visit:

For more information about Donna Everhart, please visit her online at www.donnaeverhart.com.

Praise for The Moonshiner’s Daughter:

“Rousing… movingly explores Jessie’s struggle with her eating disorder, viscerally describing her twin desires for nourishment and purging in relation to a deep need to define herself… Everhart’s story of self-discovery, rife with colorful characters and a satisfying twist, will thrill readers.” – Publishers Weekly, STARRED Review

“This riveting novel set in the 1960s will have readers, especially those who enjoy Kaye Gibbons and Anna Jean Mayhew, captivated from the first page.” – Booklist, STARRED Review

“Donna Everhart perfectly captures North Carolina in the early 1960s as she tells the story of a family making moonshine. The Sasser family business is anathema to Jessie because of its role in her mother’s death, and the family’s dedication to it is puzzling for her. Everhart’s portrayal of Jessie’s coming-of-age is realistic and heartbreaking. You will root for Jessie, the Sassers, and the moonshine before it is all over.” – Linda Hodges, Fiction Addiction, Greenville, NC