As I struggle to downsize my life, one possession is glaringly incongruous with said objective: my mother’s rhinestone crown. I can’t bear the thought of parting with it.

Mama got it before I was born, during a 1964 trip to New York City. Her stated objective of the trip was to take my brother to the World’s Fair, but in retrospect, she had ulterior motives aplenty. Upon arrival, her first order of business was getting her hair styled at the salon of celebrity hairdresser Mr. Kenneth. She also picked up a chic wig there that proved a good investment, since she wore it years past its prime. Spurred on by a fun-loving cousin based in Manhattan, Mama proceeded to twist the night away at The Peppermint Club, buy 13 pairs of shoes, and even got called out of the audience and onto the stage of The Price Is Right, where she won a refrigerator-freezer (and her picture in her hometown newspaper). She was positively effervescent.

Somewhere along the way, a rhinestone crown in a shop window caught her eye, and feeling glamorous, she claimed it for herself. The dramatically articulated crown was, as she’d explained to friends and family, fully round (“not like a tiara, which is just half a crown,”) and had some heft to it (“my wig holds it best”).

While I have no photos of her wearing the crown, for as long as I can recall it was kept atop the TV set in the Natchez, Mississippi, home we shared with my grandmother. It rested on a small red velvet pillow trimmed in lace, which my grandmother made for it, either because she felt the crown required even more pomp or because she saw the duo as a tongue-in-cheek art installation.

As for all those shoes, I’m told she wore them every chance she got, long before pairing sparkly tan pumps with Bermuda shorts was chic. Even after her bout with gout left the shoes permanently unwearable, she still quietly worshipped at their altar—a stack of dusty boxes tucked in a corner of her closet.

Though as a child I had examined the exotic contents of those boxes, one pair would reemerge as I assembled an outfit for my first date to the prom. After trying on the dress I’d found in Jackson, Mississippi, I realized I should also have looked there for shoes. (In Natchez, tap shoes were as seductive as it got.) After studying me from head to toe, Mom had an idea. She disappeared briefly and returned with a strappy pair of silver heels, holding them out to me as if I were Cinderella and my life was about to change.

I recoiled, knowing she’d just fished them out of her closet.

“They are certainly not ugly,” Mama huffed. “I got them from Bergdorf Goodman!” (Now, I’m impressed; then, not so much.) “Just try them on, honey. Let me see how they look on you.”

Begrudgingly, I strapped them on and took a few steps. But something was amiss. I appeared to have a slight limp.

“They’re not broken; they’re uneven on purpose,” she said in a conspiratorial whisper. It was then I learned that she’d had a cobbler file down the right heel of each shoe ⅛-inch and recap it. “That’s what Marilyn Monroe did,” she explained unconvincingly, mimicking Marilyn’s character “Sugar” on the train platform in Some Like It Hot. “Don’t you want to walk like a movie star?”

“I am not wearing a crown to the prom,” I insisted.

She thought for a second. “Good point. You wouldn’t want to upstage the prom queen.”

After my mother retired to Florida in 1992, her closet no longer contained the prized shoes. (I think they had disintegrated). The crown, however, was still on display atop her living room TV set, where it would sit until her passing a decade later.

When the crown came into my possession, one thing I knew was that it wouldn’t be kept on a pillowy perch atop our television. But I couldn’t bring myself to box it up. Somehow, that seemed disrespectful. I put it on my bedroom dresser next to a picture of Mom as a glamorous young woman—the way she forever saw herself.

My mother’s youth explains a lot about the crown. While growing up in Bunkie, Louisiana, she spent endless hours camped out in the family-owned movie theater. “It was my babysitter,” she liked to say—and it affected her in ways I never recognized until I was older and then she was gone.

Countless hours of watching Bette Davis and Katharine Hepburn and Cary Grant and Tyrone Power taught her how to dream big, how to dress elegantly, how to flirt effectively, and even how to talk like an aristocrat—well, at least at the start of a big family dinner. While seated with her parents, grandparents, aunts, and uncles, my mother—conjuring Carole Lombard in My Man Godfrey—announced, “Muh-mahh, please be a dear and pass the gravy boat.”

My mother’s adoring fans, aka her family, darted their eyes and smiled in disbelief. After a few seconds of stunned silence, my grandmother mustered a quip that ended the pretense. “Listen, missy, I don’t know what you’ve done with my daughter, but I want her returned immediately.”

I realize now that the rhinestone crown represented the glittering life my mother very much wanted. Apart from a few sad chapters, she wound up with a good one but not a stellar one. But she did have the New York City trip. And she did have me. I was special, too; she tried in vain to tell me.

As I look now at the crown, I quietly implore, “Listen, you, I don’t know what you’ve done with my mother, but I want her returned immediately.”

In our 2022 essay series, author Denise Gee shares memories and personal tales that celebrate the inimitable joys and escapades of Southern life. A Natchez, Mississippi, native, she is the author of six acclaimed books on Southern entertaining and design. Denise has worked for decades as a writer, editor, and stylist for magazines including Southern Living, Better Homes and Gardens and Coastal Living—and now, Southern Lady. She and her photographer-husband, Robert Peacock, make their home in McKinney, Texas. For more, visit denisegee.com. 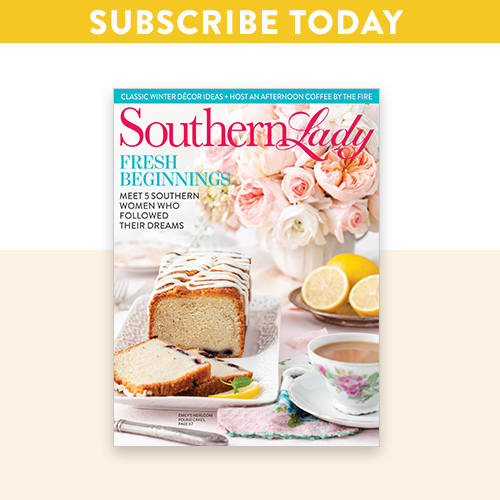 Denise Gee Essay Series: As Luck Would Have It

Our July/August 2022 Issue at a Glance