“This is how my mother made biscuits,” Nannie said, delicately patting the dough. “If you show it tenderness, you see, it’ll return the favor.”

I understood what that meant from a tactile perspective, but not how it applied to me finding her making biscuits one morning with tears in her eyes.

“Oh!” she said, a tad startled. “Nothing, sweetheart.” Shrugging off my concern with a sweet smile, she replied, “I was just thinking about making these when I was a girl—about your age.”

I tried picturing her circa 1916, making biscuits in her family home in Ruston, Louisiana. Her brother, Jack Jimerson, still lived in the old place, and Nannie and I would go there on occasion to visit his family. That kitchen seemed dark and gloomy compared to her current space, where soft, natural light was abundant and large leaded glass windows framed century-old fig trees.

I now realize the proper response to such a poignant memory would have been, “Tell me about that time.” Instead, my preteen self rapaciously replied, “When will the biscuits be ready?”

I took for granted what an exceptional and convivial cook Nannie was until after her passing—and not long afterward, my husband and I bought our first little house. Missing her terribly, I began to channel her cooking spirit. One Saturday morning, I was seized by the notion of recreating her biscuits. Flipping through her cookbook, Aunt Freddie’s Pantry: Southern-Style Preserves, Jellies, Chutneys, Conserves, Pickles, Relishes, Sauces . . . and What Goes with Them (Clarkson N. Potter, 1984), I was grateful to find her recipe, which I followed faithfully. But in the process, something didn’t feel quite right—literally. The dough was stiffer than I remembered, and the biscuit rounds less pillowy. Thus, as feared, the resulting baked goods were more briquette than biscuit.

I soon became obsessed with biscuit making, trying recipes from every reputable source to find one that came closest to hers. And all too often, the biscuits were too tough, too flaky, too soft, too taste-free. Defeated, I hung up my biscuit-making apron and called it a day. Make that a decade. That changed in 2004, when I became an acolyte of chef Scott Peacock, and chiefly, his biscuit recipe in the acclaimed book he cowrote with the great Edna Lewis, The Gift of Southern Cooking (Alfred K. Knopf, 2003).

Not only were Scott’s biscuits like Nannie’s, but dare I say it, they were better. They incorporated lard instead of butter. They also got a lift from homemade baking powder, which Nannie once said she had made with her mother. Satisfied with my new go-to biscuit, I closed the cold case on Nannie’s missing recipe.

Following Lee’s death, I received a treasure trove of his personal papers, which, during the pandemic, I devoted my time to reading, sorting, and filing. And there, tucked among all his wit, wisdom, and family photos, was a letter with handwriting I instantly recognized as Nannie’s. Furthermore, the letter was her response to Lee’s request for her biscuit recipe, which needed to be sent posthaste to the editor of the book, since it was already in production.

“Honey, I’m so sorry,” Nannie had written, “but all the testing and retesting of so many recipes this year has worn me to bits.” She had no more energy for exactitudes. “Whatever biscuit recipe y’all choose to use is fine by me.” Her polite rejection of Lee’s hair-on-fire recipe request was brilliant, but what was truly priceless was the story that followed (excerpted here):

When I was about 12, Mama got sick. Sadly, she’d lost a baby we were expecting, and she was confined to bed for a time. Since I was the oldest girl, I was put in charge of the cooking. Every day Mama would tell me what to get and from where and whom and how to make this or that so there’d be supper on the table when Daddy got home from the brickyard.

Before his arrival I’d take Mama a plate of food to her bed so she could taste it. She’d say it needed more salt or not so much pepper, and most of the time that the chicken needed more time to cook. (Ha!) For the first week, Daddy ate his meals with us kids mostly in silence, never remarking on my cooking, which I so wanted him to do, since I thought I’d done pretty good. Then one day he said, “You know, dinner sure would be better if we had your mama’s biscuits.” Well! Was I ever deflated! After clearing the table and washing the dishes, I went to my room and cried into my pillow. I’d been trying so hard! The next morning, I told Mama what Daddy said. She assured me he’d meant no harm; that was just his way. Then she got an idea. “Go get the little wooden table in the kitchen that holds the biscuit bowls and rolling pin. Clean everything real good and bring it all in here by the bed.” Well, I did, and she told me what else to get—flour, buttermilk, fresh lard, etc. “You and I are gonna make biscuits,” she said.

While propped up with pillows, she told me everything I needed to do, and why things needed to be done a certain way. And I made batch after batch of biscuits. Anyhow, I finally got the cussed recipe right, and just in time. You should have seen Daddy’s face when he walked through the door. He was so happy. “I smell biscuits!” he said. (I’m sure he did!) At the table Daddy was more talkative than ever, telling us about what had gone on at work that day. It was like Mama was right there with us. I made those biscuits every afternoon until she was well enough to stand upright long enough to cook again. Even then, though, she put me in charge of making the biscuits, which by then I could make blind-folded.

Stunned, I pressed the letter to my chest—more precisely, to my heart—to absorb it for posterity. So that had been the source of those sentimental tears. The secret to Nannie’s pillowy biscuits transcended any list of ingredients. It was the mother-daughter bond as sweet as Ruston honey. 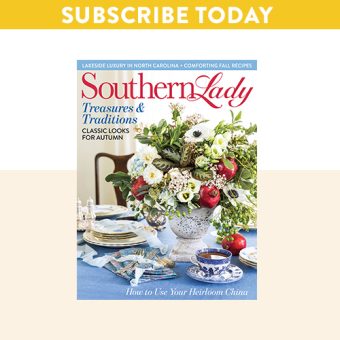 Send Your Valentine a Treat from These Southern Confectioners and Bakeries