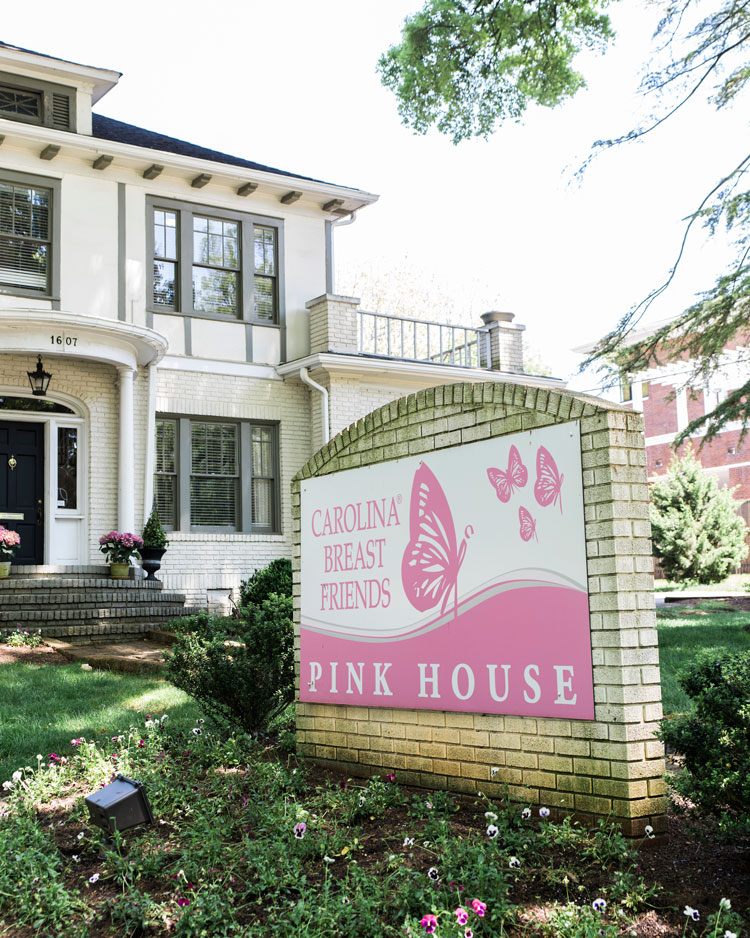 The Pink House, a stunning Southern-style Victorian home, stands out on Morehead Street in Charlotte. Home to the nonprofit Carolina Breast Friends, its namesake reflects not its hue but rather its mission—to unite and support breast cancer survivors.

Chris Ebel, whose late wife, Kristy Adams-Ebel, founded CBF in 2003 after her own diagnosis, says the vision was born of the need for a positive place women could go to learn how to live their lives while battling breast cancer—just as Kristy did until her death in 2006. “They wanted to go where they could feel like there is light at the end of the tunnel and laugh about what’s going on rather than cry,” Chris says of Kristy and some friends she made during chemotherapy.

Pam Phipps, founding CBF vice president and current advisory council cochair, met Kristy during her proactive quest for such a cohort. “Kristy wrote an article in the Charlotte Observer looking for other breast cancer survivors just three weeks after my surgery,” says Pam, a 12-year survivor. “Her vision was exactly what I was looking for, and I wanted to get involved. We clicked. She possessed an indomitable spirit. Her smile and personality were charismatic. From there, the whole group just took off.”

Kristy dreamed of a “one-stop shop” where women facing fresh diagnoses could go to try on wigs, scarves, and hats; to research the disease with access to top resources; and to connect through counseling with others who have walked the road.

Though Kristy did not see the dream fulfilled in 2010, her legacy lives on in the walls of the Pink House—walls proudly painted in the signature color. “Shortly after her passing, we were able to find the house, and things just seemed to work out,” Chris says. “There was a little divine intervention and probably a little Kristy intervention.”

“People tell me that when they walk into the Pink House they just feel at home,” he continues. “It’s supposed to be that respite for survivors, where they can go and relax for a change—forget about what’s going on in their bodies and just enjoy life.”

Continue reading for a home tour and more about the history behind the Pink House from its talented designer Cathy Austin. Pam explains that Cathy worked to create an “elegant but warm, welcoming interior” for the women of CBF.

Cathy was a sponsored blogger for High Point Market this spring, and we’re looking forward to seeing her at Market again this weekend. If you’re heading to High Point, don’t miss our lunch event and book signing for Southern Style Decorating, hosted by Aidan Gray on Tuesday, October 20, from 12-2p.m.

For more information, visit carolinabreastfriends.org, and check out our October issue for the full story.