Filling homes across the region with warmth and wafting aromas, soups and stews are a centuries-old tradition in the South, and in the fall, we savor their time in the culinary spotlight. The seasonal staple has a plethora of possibilities, and in her new cookbook Southern Soups & Stews, Nancie McDermott showcases tried-and-true favorites—from braises and broths to gumbos and burgoos, chowders and muddles to bisques and boils. “Southerners have made them over time and feel a deep connection to them,” Nancie says. 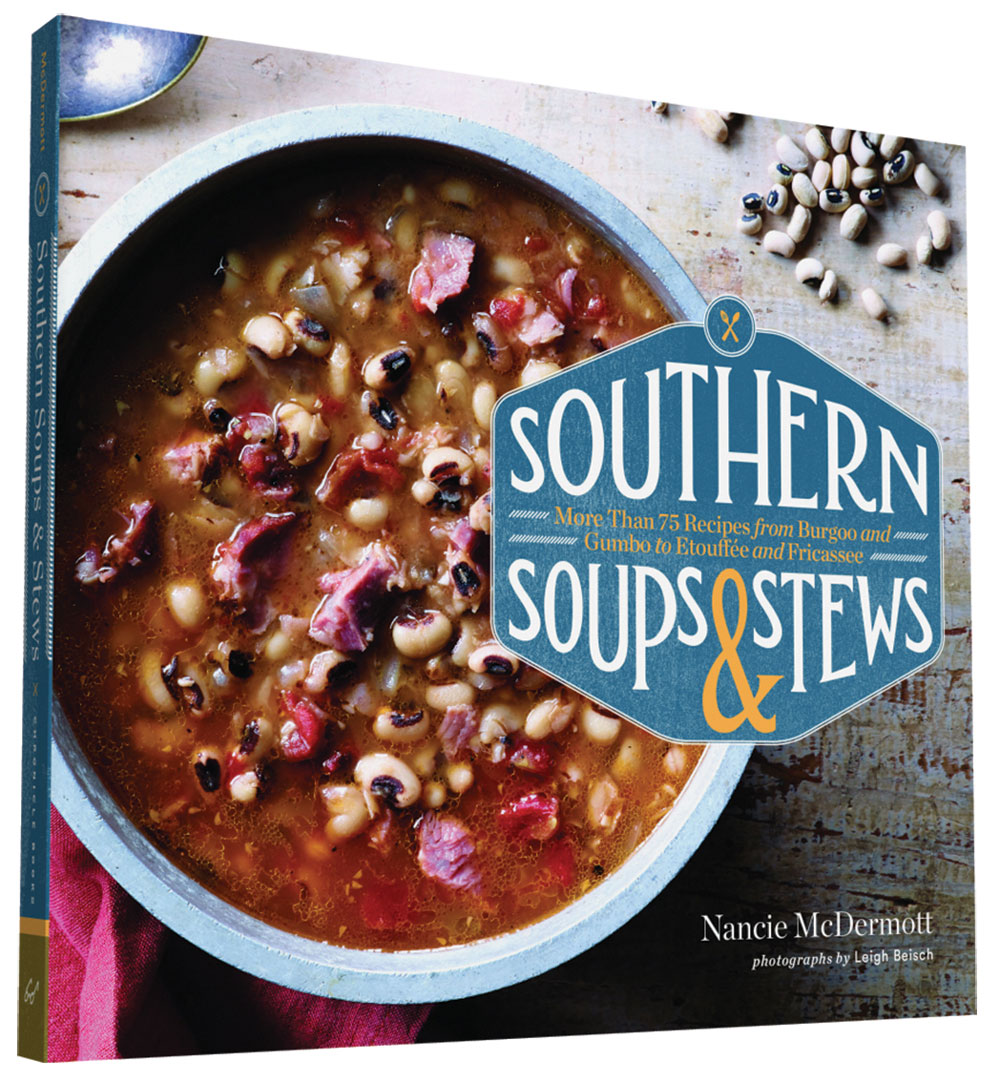 The inspiration for this cookbook can be traced back to an October weekend when Nancie was in college and went home with her friend, Debbie Gooch, to Reidsville, North Carolina, for a family stew. “That was really my introduction to Brunswick stew on a personal level,” Nancie says. Southern Soups & Stews includes classics like Benton Gooch’s Outdoor Old-School Brunswick Stew, as well as convenient contemporary updates like Indoor Kitchen Burgoo.

Nancie is as much a fantastic cook as she is an expert on the history behind her recipes. We learned so much from her discussion of Lane Cake earlier this year that we had to get her insights into the tradition of Brunswick stew.

Learn about the season’s timeless dish, and enter to win your copy of her cookbook. When crisp, cool weather arrives, you’ll be ready to greet the cozy season with savory soups and stews. 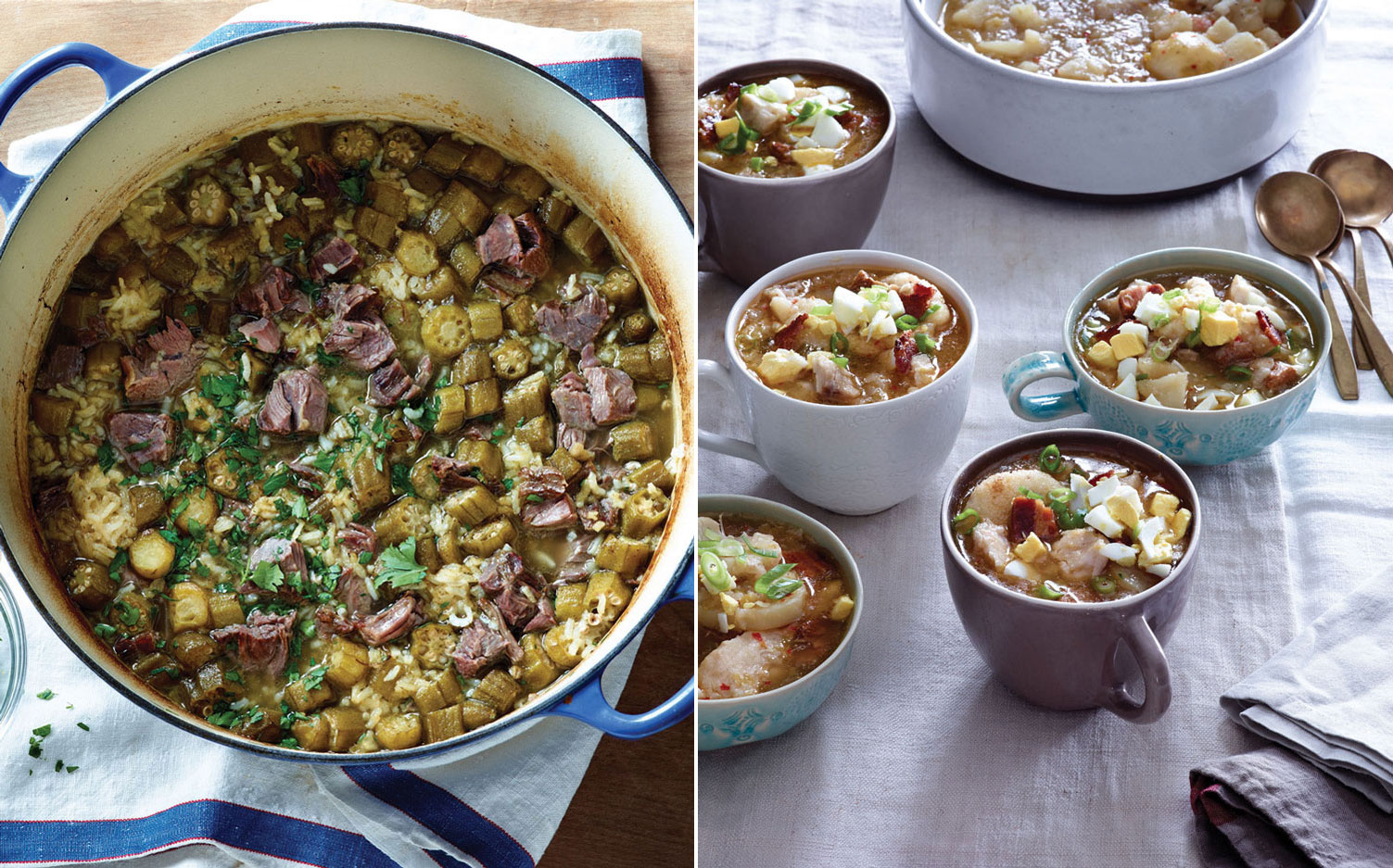 SL: Tell us about the tradition of Brunswick stew in the South.

Nancie: Brunswick stew signals the arrival of fall in communities throughout the Mid-South. Not only is it a dish with a recipe (or recipes, I should say!), it’s an event—a special occasion—serving as a touchstone for families, faith communities, volunteer fire departments, schools, and towns. The cooking process is a matter of adding the right ingredients in the right order, and then stirring, stirring, and stirring some more.

The paddle used to stir is chosen by the stew master and either made by hand in somebody’s wood shop or chosen from among brand-new boat paddles and oars. Typically a stew is announced in the community with posters at busy intersections, flyers at football games, and announcements in community newspapers, church bulletins, and on local radio shows. Usually a generous supply of stew is made to sell that day with plates stacked up with sliced white bread and sleeves of saltine crackers. Many a fire truck has been purchased, and many a local softball team has been outfitted with new equipment or uniforms on the basis of a good Brunswick stew.

SL: How have you experienced this tradition personally?

Nancie: I grew up going to stews out in the countryside of Piedmont, North Carolina, and since fall is my favorite season, I associate Brunswick stew with happy gatherings. The first stew that brought the process home to me was one at the home of my friend Debbie Gooch in Reidsville, North Carolina. We were students at UNC in Chapel Hill, and she invited me home one October weekend to help her family with their annual stew. This was the local version where a family gets together and gathers all the groceries and equipment to make stew for each household to take home and freeze for the winter. We sat at the kitchen table on Friday night, helping Debbie’s mother and sister pull the meat off lots of chickens that Mrs. Gooch had cooked the day before. The broth went into the big cast-iron wash pot out in the backyard, and Mr. Gooch got a wood fire going and tended it all night long, adding beef, water, and the cooked chicken. Vegetables went in at the proper times, and by midmorning on Saturday, we were feasting on a fine and delicious Brunswick stew.

SL: What are the differences between a Brunswick stew and a burgoo?

Nancie: Brunswick stew is known, loved, and made with dedication and many variations all over Virginia, North Carolina, and Georgia. There are ongoing discussions as to which state is the original home of Brunswick stew, which dates back at least to the late 19th century. Burgoo is the gem of Kentucky community cooking, and no other state can claim that proud tradition.

Burgoo and Brunswick stew have so much in common that recipes converge more than they disagree. The elements of chicken, beef, tomatoes, potatoes, corn, and butter beans or lima beans are shared between the two stews, as is the ultimate texture of thick, rich, meaty, vegetable-enhanced goodness. Burgoo, however, will always have mutton or lamb, and it tends to include pork as well. The burgoo vegetable lineup expands well beyond that of a traditional Brunswick stew, with an array of crisp and crunchy fresh vegetables going into the pot. Worcestershire sauce is required, and the accompaniments include a side of slaw and breads ranging from cornbread and yeast rolls to the Brunswick stew stalwarts of sliced white bread and saltine crackers.

SL: Tell us how Indoor Kitchen Burgoo evolved from these traditions.

Nancie: Since Southern Soups & Stews is a cookbook rather than a history or memory book, I wanted to provide recipes that people could make with success and pleasure in a home kitchen. While the quantities of ingredients and the scale of the process is daunting for any individual cook, there is nothing obscure or too challenging about the process of making burgoo. All I had to do was research the ingredients to discover what goes into a pot of burgoo, according to traditional recipes serving hundreds and even thousands. Then I worked out the proportions and timing for a good, hearty pot of burgoo that we can make at home for a few people to enjoy and share later or for a dozen to enjoy at one sitting. While there’s great pleasure in the outdoor cooking, the huge gathering, the music, and the multigenerational crowd that comes with a burgoo- or Brunswick-stew-making event, I think doing a smaller scale, indoor version that won’t break the bank or wear out all four burners on the stove is a great way to bring the spirit of these grand community-event dishes into our home kitchens.

This interview was edited for space.