The Crescent City. The City That Care Forgot. The Big Easy. No matter the moniker, New Orleans is a place filled with mystique, charm, and a personality all its own.

As the plane banked on our approach into New Orleans and the lazy bends of the Mississippi River came into view, my heart beat a bit faster. I couldn’t wait to spend a few days getting reacquainted with the city I once called home and to experience again the contrasting combination of lively spirit and laid-back attitude that is so endearing to residents and visitors alike.

The drive to the French Quarter was filled with many sights, some very familiar, some inevitably changed, but all captivating to someone hungry for a taste of this exotic locale and its unique flavors—and that doesn’t apply just to the food. New Orleans is blessed with a history that blends numerous cultures—Spanish, French, Creole, and Cajun, to name a few—into a savory mix as spicy as the jambalaya that appears on restaurant menus throughout the city.

I made my way down Decatur toward Jackson Square where sidewalk artists sketched and painted everything from charcoal portraits to quaint Quarter scenes. At one end of the park stands the triple-spired St. Louis Cathedral, easily the most recognizable building in New Orleans. One can’t help but feel in awe of this magnificent holy place, and I paused in my journey to take it all in.

I wandered through the Quarter, from Conti Street to Pirate’s Alley to Chartres Street, perusing wares of all descriptions, before making my way down Royal Street to the Gallier House. Formerly the elegant Victorian home of famous New Orleans architect John Gallier, it has been restored to its post–Civil War beauty, giving us a peek into his lavish lifestyle. I also stopped to admire the Beauregard-Keyes House, a raised center hall dwelling named for two of its most famous residents, Confederate general P.G.T. Beauregard and author Francis Parkinson Keyes. Just across the street stands the only remaining French colonial building in America, the beautiful Old Ursuline Convent.

As the light began to fade, I quickened my pace and walked the few blocks from the Quarter to the Renaissance Pere Marquette on Common Street. The jazz-themed hotel has floors named for music greats like Etta James and Louis Armstrong, allowing guests to “dream with the legends of jazz.” I settled into my corner room on the Duke Ellington (18th) floor, which boasts a fabulous view of the French Quarter, and eyed with pleasure my plush accommodations. Though a quick nap under the fluffy comforter would’ve been nice, I dressed for dinner, then headed downstairs. 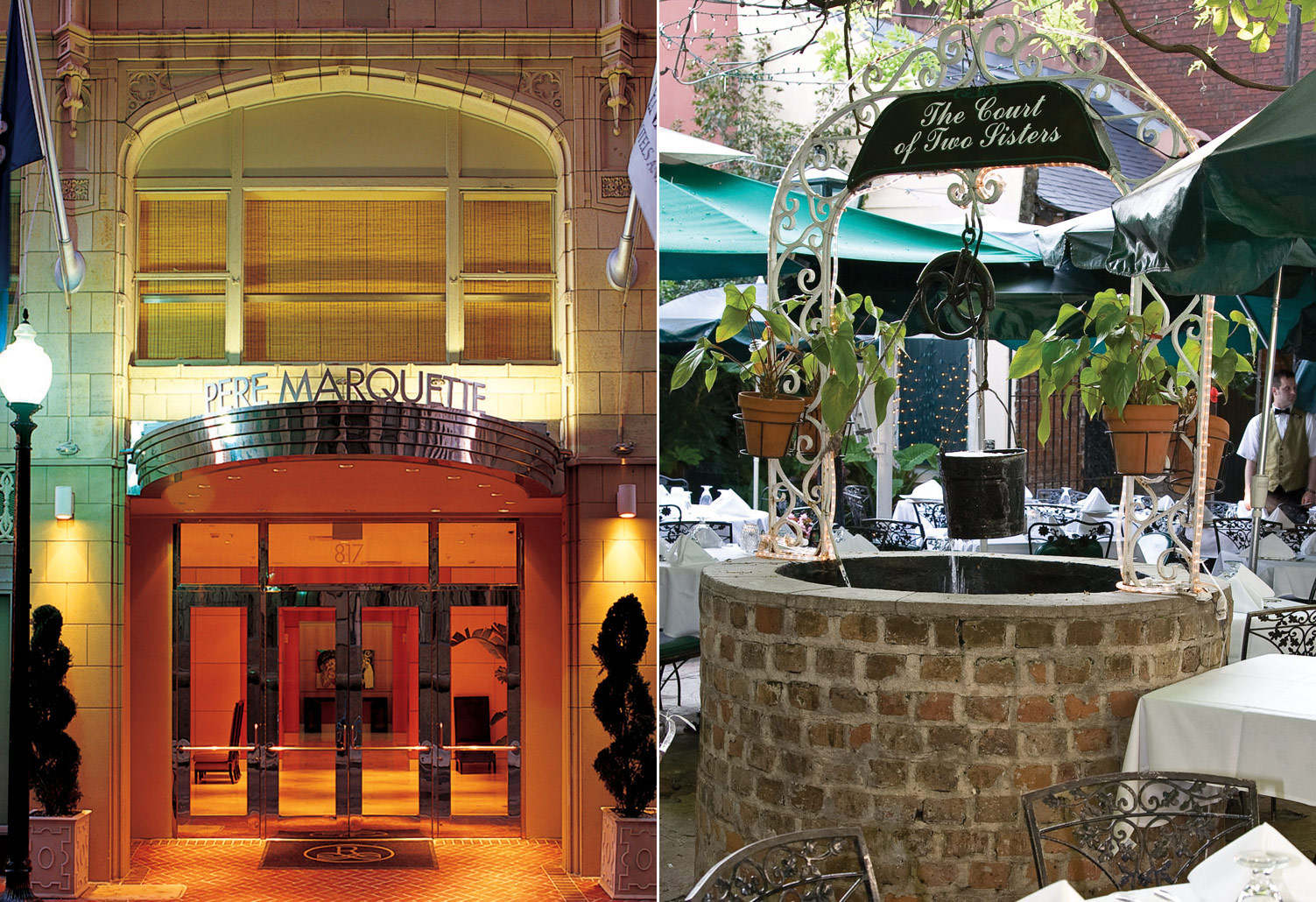 New Orleans arguably has more than its fair share of the best restaurants in the world. Choosing tonight’s dinner destination was difficult, but I went with my sentimental favorite, The Court of Two Sisters. Located in the historic Governor’s Row section of Royal Street, the restaurant features the Quarter’s largest courtyard and the best duck à l’orange I’ve ever tasted. I could have stayed all night under the canopy of trees trimmed in twinkling lights, listening to a soothing fountain serenade, but I had plans for music of a different beat.

I could hear the blare of a tenor sax a block away as the jazzy blend of reeds and strings poured out of the door of Preservation Hall. I took a seat and listened as the Preservation Hall Band treated the packed house to this unique brand of music so identifiable with the city. An hour or so later, I reluctantly called it a night and slipped back to the hotel to rest up for the following day’s full agenda.

The next morning dawned with the promise of a lovely Louisiana day. Since I had plans for brunch later, I grabbed a latte at the Starbucks downstairs at the Pere Marquette and sipped my way to the Presbytere, a museum dedicated to that party of all parties, Mardi Gras. After a fascinating tour, I indulged in the magnificent brunch at Brennan’s. Enjoying a longtime tradition of New Orleans, I feasted on Eggs Owen and polished that off with Bananas Foster, an original treat invented at this very restaurant.

The sweet siren songs of the French Quarter stores were calling my name, so how could I resist? After hours of exploring dozens of shops, each one more charming than the last, I walked back to the hotel, laden with packages but lighthearted in spirit. I had just enough time to get to the New Orleans Cooking Experience to learn a little about cooking, New Orleans style. Our guest chef and teacher was the renowned Poppy Tooker, who served up double portions of food and fun. The best part? We dined on the dishes we prepared, reveling in our newfound culinary skills.

I knew I couldn’t leave New Orleans without stopping by Café du Monde for beignets and French Market coffee. The last morning of my visit, I got a to-go order and enjoyed my sugary breakfast on the riverfront, watching massive ships from faraway places bringing their goods to port. As the soft breeze blew in off the Mississippi and the magic of the Crescent City swirled around me, it seemed as though I could hear native son Harry Connick Jr. singing, “I’m right where I belong/ Oh, my New Orleans/ wait for me,” and I realized that wherever my life’s journeys take me, here is where my heart feels at home.